At this months meeting, we held elections for our club officers.  Ed will remain President, Frank will remain Treasurer, and I will remain Secretary.

On to the fun part!  In preparation for fox hunting in the spring, we built tape measure yagi antennas!  This was definitely a fun hands on activity.  I think we all learned a thing or two about building home made directional antennas. Click the article to see pics! 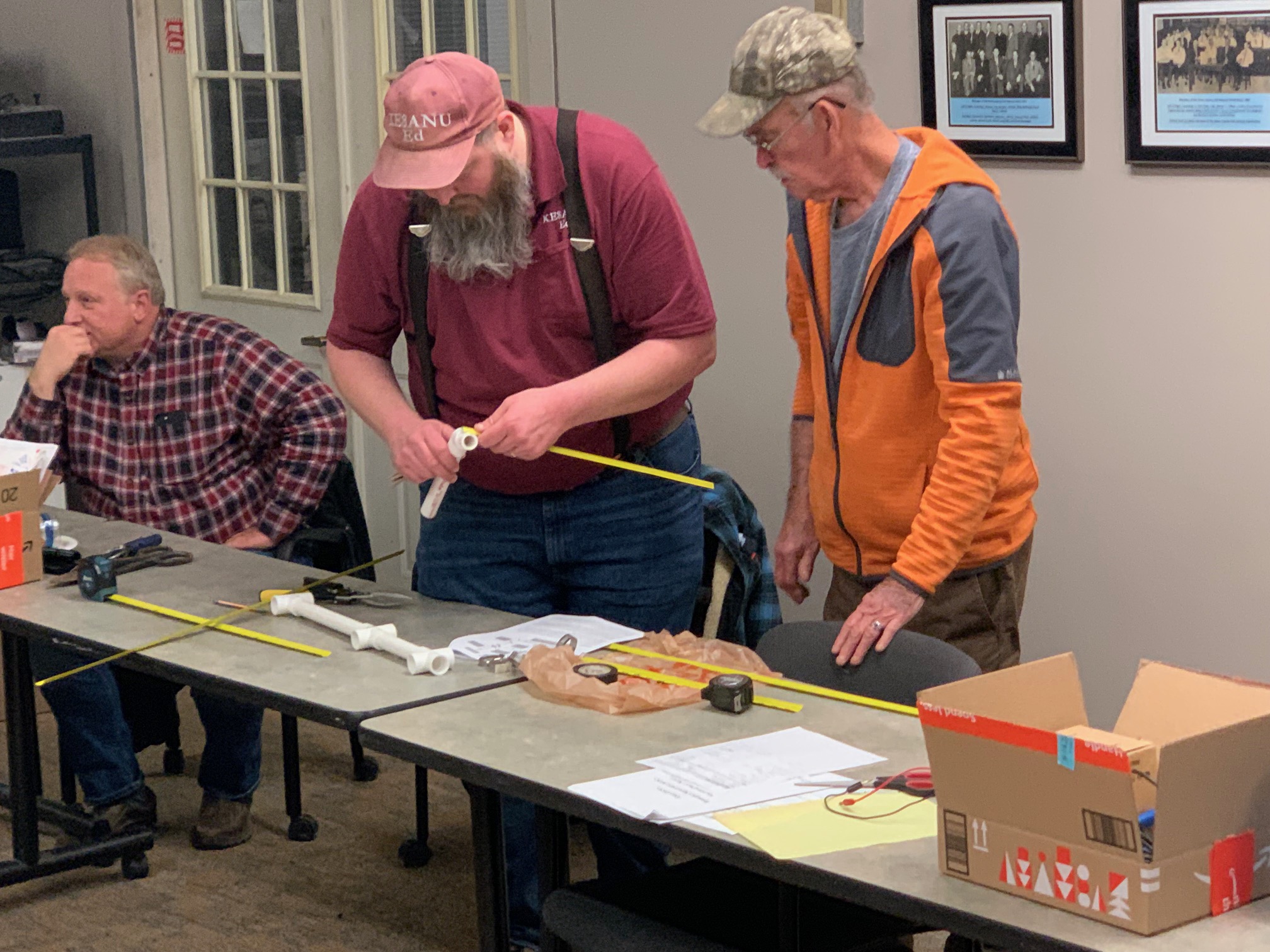 What a fun meeting!

Thanks to Philip Stanley W8NZB for making the long drive to his hometown to give the presentation!  We went over the guidelines and structure of a basic fox hunt, and had some hands on time with attenuators and home made yagi antennas. 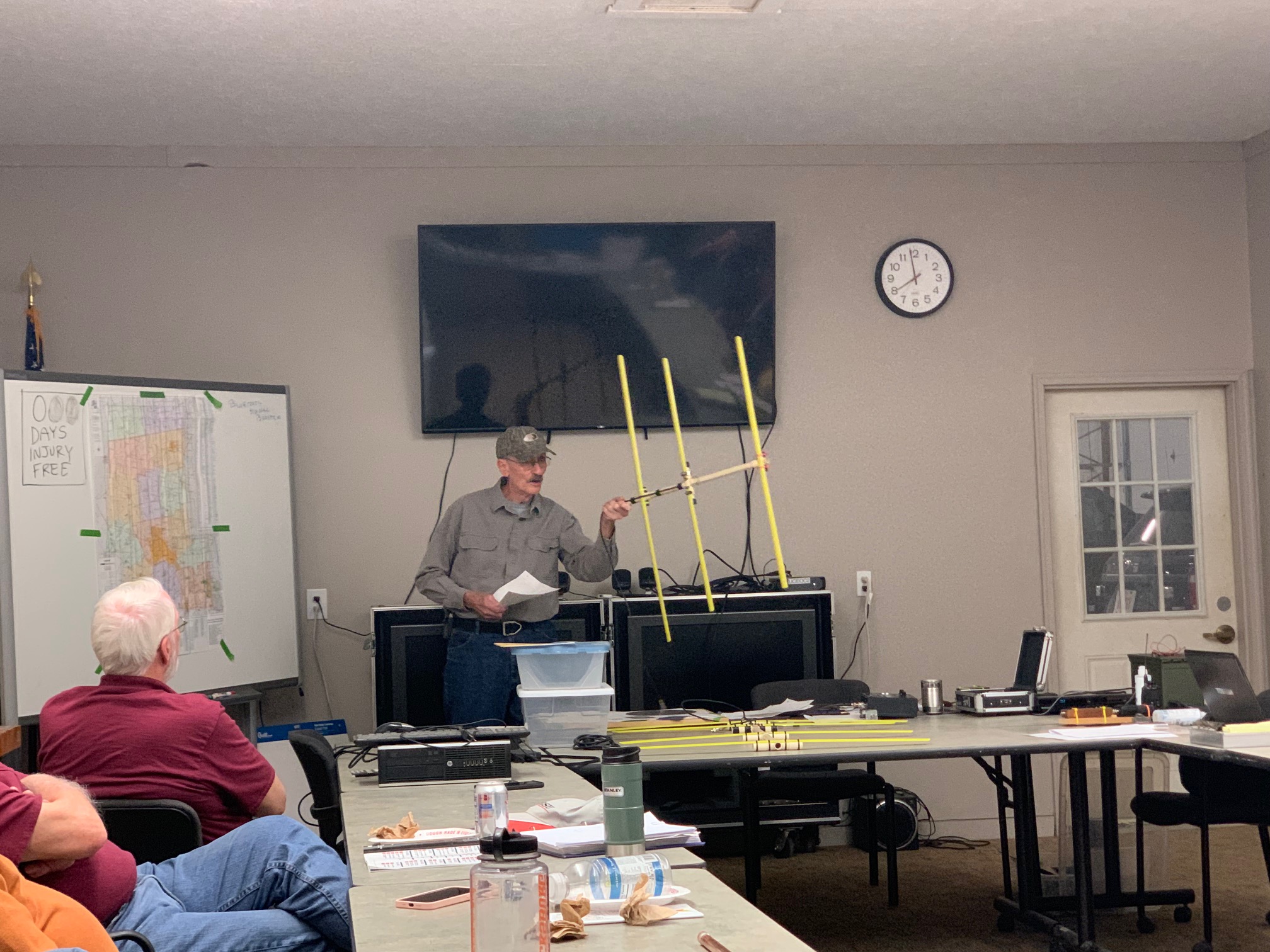 Ohio State Parks On The Air

We are at Alum Creek State Park for OSPOTA. Click on the title to see pictures.

On August 24 the first largest loop went up and looks like the drawings.

We just didn’t have enough daylight to install the second, smaller  loop but all of the materials are here and ready for Phase II.

After we stowed our gear,  Ed , Chris and I put my spiffy new RigExpert  antenna analyzer on the loop and it appeared to behave much as the EzNEC  simulations said that a single loop would behave.

We will want to trim about 8 ft off this loop to move the resonant freq up a smidge,  ( we cut it a little long initially), but so far, so good.

Ed and I hooked up my mobile ICom 706MKIIG to the antenna ( complete with the “final” 125 ft of RG213 coax attached to the 75ft coax coming down the tower) and gave a listen.

My automatic tuner didn’t seem to be working. Nevertheless we worked  WB2MLY in Port Huron , MI  and KB3LXZ in NW PA  on 1.871 MHz who both said we sounded pretty good for under 100 watts on 160 meters..

I am traveling for a few days  and will return First week of Sept  with the intent to get the second loop up. All the stuff is on-hand.

Since all the support hardware is in place, we need to measure out the wire and string it through the small loop insulators which are already in place.

To “finagle” the wire around the outback shed and other tower antenna takes a minimum of two guys (I think) and went smoothly with three ( thank you , Joe.)

For now, if anyone wants to use the loop , the coax is accessible from the North side of the tower, hanging on the outside of the fence.

On 160 meters the best bet is for operation below 1.9 MHz, the lower the better.

On 80 meters, The lower end of the band is again better but should be under 10:1  for folks trying out 75 m phone  with a tuner.

The idea of the 2nd loop is to improve things on the high end of both 160 & 80 m bands, so things should get much better after that is installed.

This first, largest loop is intentionally sized toward the low end of the band(s).

Nevertheless, Frank can go to town with his new tuner  and I’ll be curious to hear how it works for him. Including 40 meters?

I’ll report back in soon.

Click on the title to view pictures from Field Day taken on Saturday..

We had a fun time at our first in person meeting this year. It was great seeing everyone. Joe, K8JWL gave a tour of the N8IG repeater which included explaining what all the antennas on the tower were for. We also discussed some of the projects that we need to get wrapped up hopefully before the weather gets cold again.

Jamboree on the Air (JOTA) 2020 was a success. We usually use a hand mic and try to get the scouts on the air talking to other scouts. This year was different. We decided to setup for using digital modes. We weren’t sure how that was going to go. Ed’s limited knowledge of using FLDigi has been on 2 meters practicing using FLMsg with FLDigi to send form information. We were using FLDigi for QSOs using keyboard to keyboard mode for the JOTA station. That was a learning experience for us. We weren’t sure how well using a computer to talk to people over the radio would appeal to the scouts, but considering the Covid-19 pandemic, we felt it would be safer than passing a hand mic around. .

We want to thank Stan, N8BHL and the Delaware ARES group for letting us use the -145.19 CTCSS 123 Hz Delaware machine for Jamboree on the Air at Camp Lazarus. Ed had the radio tuned to the repeater and heard someone key up on digital. He wasn't sure what mode was being used, so he keyed up the mic and asked George, WD8KNC from Centerburg. Then through conversation asked him to use MT632KL. George was getting his equipment ready for an upcoming Diginet. Several scouts talked to him. He said he uses digital modes more than talking on a microphone. I think we may have surprised him being on 2m when he was getting his equipment ready for the Diginet. George was great for the scouts to talk to and we appreciated him taking time to have some good QSOs with the scouts.

We were also able to talk to John, KE8JHH just outside of Marysville on 2m simplex from Camp Lazarus using a Jpole mounted on a tripod on 5 watts using MT632KL and the control operator was able to coordinate with him using voice.

On the HF side, we used PSK31 on 20 meters. We talked to a station in Florida, California, and Colorado. The scouts seemed to really get into using digital modes.

We also had 2 CW practice oscillators. Bob, WD8NVN from the Madison County Amateur Radio Club worked with the scouts to send their name in CW. The younger scouts seemed to really get into using the practice oscillators and doing their best to send CW by looking up letters on the Morse code paper to send, not just using them to make noise!

Joe, K8JWL, and Jackson helped Ed setup the HF antenna and popups on Thursday. Bob, WD8NVN from the Madison County Amateur Radio Club worked with CW, Grant K8BCI from Marion helped out where needed. All three of us set up the tables, equipment and organized the handouts. Ed’s wife Jean, KE8JHM brought lunch over and helped out talking with the scouts and adult leaders. Ed’s oldest son Jackson (who isn't licensed) did a good job explaining how repeaters work, how HF signals propagate, and general over view of how how digital modes with FLDigi worked using a keyboard and sending/receiving text with a radio and computer to the scouts. Thank you to everyone that helped out with the JOTA station.

This year was different because there weren't anyone staying in the cabins at Camp Lazarus. As a result, there weren't as many cub scouts around during the day. We had fewer scouts stop by the JOTA station, but most were older scouts and a few groups were younger cub scouts. The older scouts were interested in radio and spent a fair amount of time having QSOs with PSK31 ON 20 meter and MT632KL on 2 meter. A couple scouts stopped by twice to use FLDIGI

We appreciate the opportunity Camp Lazarus and the organizers of the Monster Mash haunted night hike event gives us to set up a JOTA station there. It is always good to be part of a larger a scouting event when trying to get scouts on the air.

Click on the pictures below to view them bigger.

We are at up at Alum Creek State Park for Ohio State Parks on the Air. Stop out for a visit and to make some contacts on the HF radios.
Near Galena, OH 43021
https://maps.app.goo.gl/5QM47dGmF9nDMNcbA

THANK YOU for another Steam Threshers Special Event Station

Between the terrible noise on both 20M and 40M, all the noise the show created all by its self, the blazing sun and 90+ heat, we still managed to make over 140 contacts at our joint venture Madison, Union, and Delaware County Special Event Station at the 2019 Miami Valley Steam Thresher Show and Reunion.

Using a G5RV Jr antenna with 100 watts stations from Italy, Nova Scotia, Spain, a bunch from Canada, and my favorite Derry, North Ireland were logged.  I don't know about other years, but this year we had wrist bands and vehicle passes and parked right behind the gas/radio station.

The Miami Valley Steam Threshers Assn gets a big THANK YOU! for inviting us back for another year.

And thanks goes out to our spotters this year: