On August 24 the first largest loop went up and looks like the drawings.

We just didn’t have enough daylight to install the second, smaller  loop but all of the materials are here and ready for Phase II.

After we stowed our gear,  Ed , Chris and I put my spiffy new RigExpert  antenna analyzer on the loop and it appeared to behave much as the EzNEC  simulations said that a single loop would behave.

We will want to trim about 8 ft off this loop to move the resonant freq up a smidge,  ( we cut it a little long initially), but so far, so good.

Ed and I hooked up my mobile ICom 706MKIIG to the antenna ( complete with the “final” 125 ft of RG213 coax attached to the 75ft coax coming down the tower) and gave a listen.

My automatic tuner didn’t seem to be working. Nevertheless we worked  WB2MLY in Port Huron , MI  and KB3LXZ in NW PA  on 1.871 MHz who both said we sounded pretty good for under 100 watts on 160 meters..

I am traveling for a few days  and will return First week of Sept  with the intent to get the second loop up. All the stuff is on-hand.

Since all the support hardware is in place, we need to measure out the wire and string it through the small loop insulators which are already in place.

To “finagle” the wire around the outback shed and other tower antenna takes a minimum of two guys (I think) and went smoothly with three ( thank you , Joe.)

For now, if anyone wants to use the loop , the coax is accessible from the North side of the tower, hanging on the outside of the fence.

On 160 meters the best bet is for operation below 1.9 MHz, the lower the better.

On 80 meters, The lower end of the band is again better but should be under 10:1  for folks trying out 75 m phone  with a tuner.

The idea of the 2nd loop is to improve things on the high end of both 160 & 80 m bands, so things should get much better after that is installed.

This first, largest loop is intentionally sized toward the low end of the band(s).

Nevertheless, Frank can go to town with his new tuner  and I’ll be curious to hear how it works for him. Including 40 meters?

I’ll report back in soon. 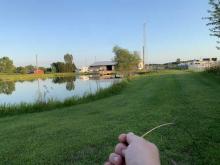 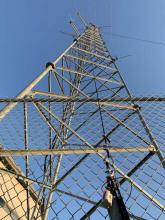 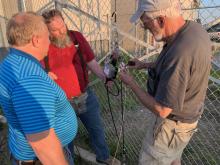 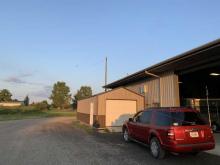 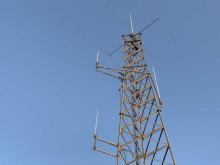 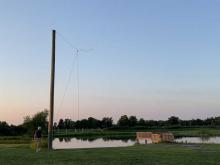 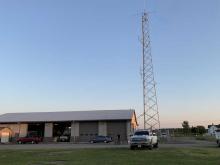